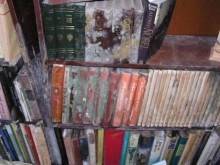 Joan Bennett, an expert in mold toxins, didn’t believe that mold in homes could make people sick. She had even testified in support of insurance companies fighting “sick building syndrome” (SBS) claims. Symptoms of the syndrome could range from skin irritation to nausea — symptoms which disappeared upon exiting the building. Some people claimed that inhaling moldy air caused their SBS, but Bennett argued that it was impossible to breathe in enough mold toxins to cause any of these effects.

But then Hurricane Katrina flooded her New Orleans home in 2005, forcing her to evacuate. She returned five weeks later and was horrified. A swarm of fuzzy green patches had engulfed everything from her prized physics books to the Turkish rugs she had bought on her honeymoon. And it smelled awful. Even wearing a mask and gloves, she still felt dizzy and nauseated. Her head throbbed. But like any good scientist, she seized the opportunity by snapping photos and swabbing samples of the mold onto petri dishes.

“I literally had a conversion experience,” Bennett said. Her gut told her the odor permeating her home was to blame. Maybe moldy homes could make people sick — only it wasn’t because of the fungal toxins she’d studied throughout her career, but the so-called microbial volatile organic compounds (MVOCs) that give mold its rank, musty smell.

It would take eight more years to prove her intuition right: Last November, she and a postdoctoral researcher in her lab, Arati Inamdar, led a study published in the Proceedings of the National Academy of Sciences suggesting that a compound emitted by mold — known as mushroom alcohol — might contribute to Parkinson’s disease.

You Can Benefit From Allergen Testing

How To Find A Mold Removal Company For Your Business

Black Mold Removal In Your Business